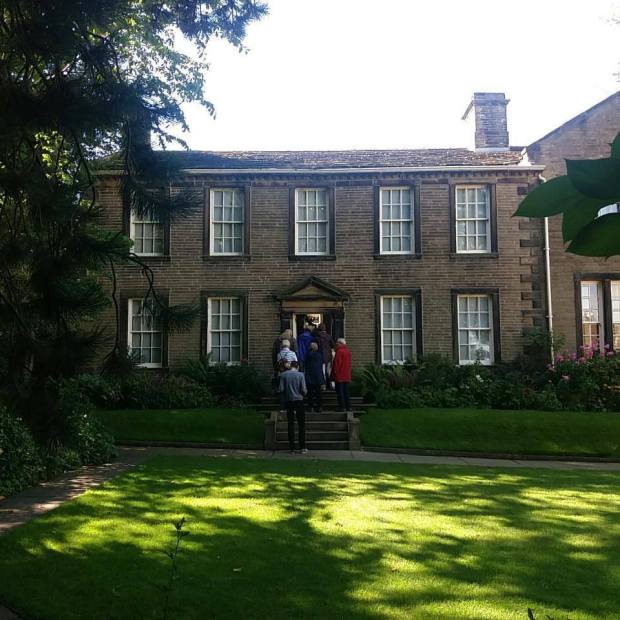 The Parsonage (and a a rare photo of Benn!)

I’ve been to the Parsonage so many times (it’s one of the things that happens when you grow up in a bookish family in West Yorkshire…) but I never get bored. I was especially interested in the Bronte 200 celebrations, which aim to mark the 200th anniversaries of the births of Charlotte (2016), Branwell (this year), Mr Bronte arriving in Haworth (2018) and the birth of Anne (2019). I was especially keen to visit after we found Anne Bronte’s grave last year.

Of course, when you’re in Yorkshire, you should really start off your lunch with rhubarb gin…

One thing that was really exciting was that the Parsonage now has the ACTUAL table that the sisters wrote at. It was acquired in 2015 and it was the first time I’d seen it. Imagine- the ACTUAL table that Jane Eyre, Wuthering Heights and The Tenant of Wildfell Hall were written on. This was the table the sisters paced round as they discussed their projects. There’s even an E carved into the wood.

I am aware that this is a rubbish photo. It is actually quite impressive in real life.

Throughout the house, there are costumes from To Walk Invisible, the Sally Wainwright drama that was shown over Christmas. The attention to detal was so amazing- it’s a shame my photography couldn’t do it justice.

This year is all about Branwell, the tragic Bronte brother, who should have been a great success but instead fell from grace. There are dedicated exhibitions: one is a recreation of his bedroom during the last years of his life, which was surprisingy melancholic. Branwell has been painted as a ne’er-do-well, but he was also a bit of an unfortunate soul and the bedroom really reflects this.

There’s also a dedicated area to Branwell’s written work, with new poetry by Simon Armitage. The best bit is seeing stuff in ‘the flesh’ that you’ve only ever seen in books- one of these was the famous Branwell sketch ‘A Parody’, which he drew in a fit of self-pity whilst ill. It was genuinely a bit of a thrill for a Bronte nerd.

One of the things I was desperate to do was to participate in an art project by artist Clare Twomey, in which visitors to the Parsonage are invited to write a line from Wuthering Heights into a new manuscript. This is because the original, handwritten by Emily Bronte, has been lost. Each participant is asked to write a line from the novel with a pencil (you get to keep the pencil at the end, to encourage you to continue writing.) I was given a line from chapter 27, in which Linton begs Catherine not to leave, or else he’ll die.I was a bit miffed I got a horrible character, but hey ho, that’s the luck of the draw. I wrote VERY carefully, so that a) my writing was legible and b) I didn’t make a mistake. Anyway, I managed it and I’m quite chuffed that my name is in something that’s sort of historical.

Part of my Haworth tradition is making a pilgrimage to the church where the family are buried (without Anne, who is buried in Scarborough.) Although the Brontes would not have recognised the church as it is now- it was remodelled after Mr Bronte’s death- there is a sense of tranquility and history.

Note the vase of heather from the moors

It was a lovely day- and to mark it, I HAD to buy something that combined two of my favourite things (there should be more book-based tea blends, IMHO):

I’ll report back on the tea ASAP.