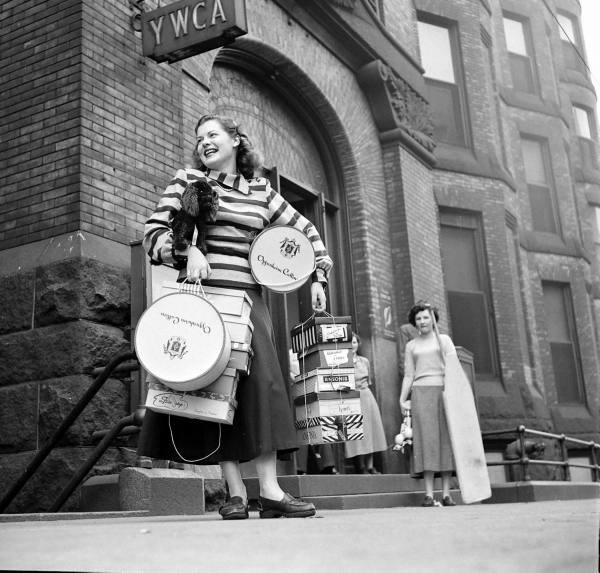 I buy most of my clothes secondhand- and a lot of them come from eBay; I’ve been doing so since I was a sixth former and I like to think my game is fierce. Often, when I tell someone one of my dresses came from eBay, I get an answer like ‘Oh, I have no idea where to start with online shopping!’ or ‘How do you know it’s going to fit?’

So wonder no more, mystery friends! I thought I’d share my tips on how to navigate the online thrift shop with ease and (hopefully) style.

It’s really handy to know what size you are in certain shops- for example, I know I’m a 14 in some and 16 in others. I also make decisions based on whether I think a particular garment will be comfy/flattering in a bigger or smaller size. Be warned though- some shops’ sizes have got smaller in recent years. Damn recession. 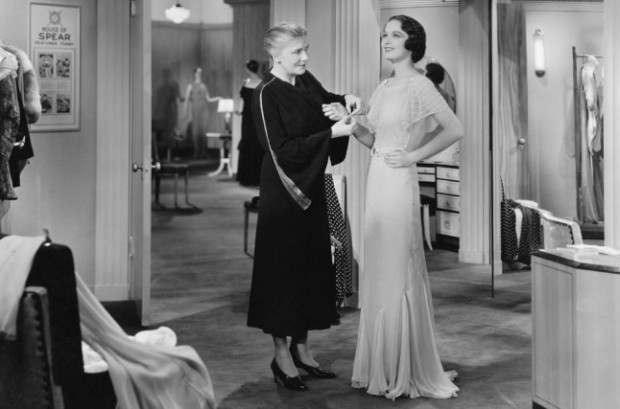 I love Monsoon clothes, but am rarely able to afford to buy from the store- so I often keep an eye on what’s new on eBay. I know that Next, M&S and Dorothy Perkins often offer things I like and I always avoid Primark on eBay. It never lasts and is often priced way up more than it should be. I also find H+M to be hit and miss with sizing, so I try to avoid it if I can. It’s often handy to have a saved search for these things. 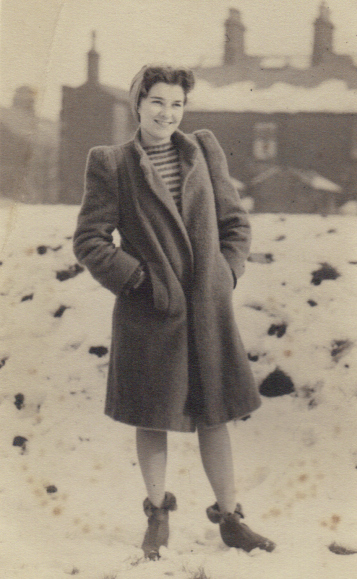 3. Buy out of season

I just bought a brand new Next winter coat for a tenner (and £3 p+p). Last year I bought some calf length DMs in the middle of July for £50. Buying out of season means you beat demand and can snag some bargains.

4. Consider a budget… and stick to it

It’s really easy to get carried away on eBay, so I think of what I’m after and how much I want to spend. Then I take a look at the Buy It Now options first, as you’re paying a fixed price. I’m also a great fan of seeing these lots from the ‘lowest price first + P+P’ angle.

5. Think about what you like- and will you really wear this dress?

Some of the eBay mistakes I’ve made have been when I’ve bought something that is really not my thing (for example- high heels. I never wear high heels, so why I thought I’d wear some patent pink stilettos is beyond me. Yellow makes me look washed out if I wear too much of it and pleated skirts make me look like I have the legs of a wrestler. So if anyone can explain why I bought a mustard dress with pleated skirt, I’d be interested.) So I stick to things I like. Mostly skater dresses with birds on. Also, never fall for that part of your brain that says ‘Oh, I’ll alter it!’ 1) You won’t and 2) that way, madness lies.

6. Be zen when mistakes happen

Sometimes, no matter how well you’ve planned your shopping spree, you end up with a dud. It happens. If it does, I either resell, give to a friend, or (more likely) donate it to a charity shop.

Do you buy from eBay? What are your top tips? 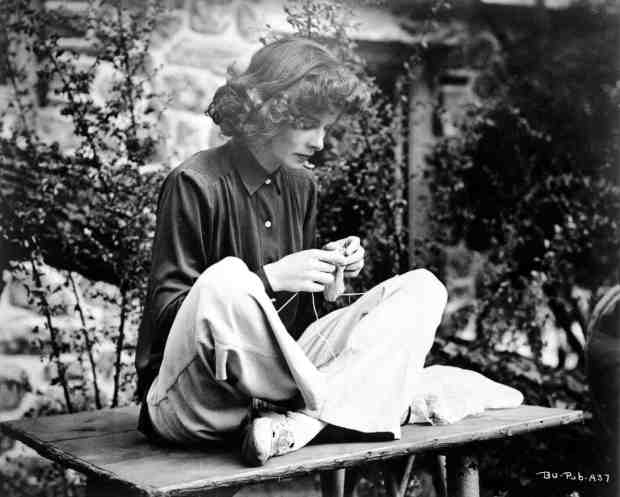 I’ve found myself desperate to get home and knit recently. This is not new, but it is a renewed sense of longing.

Despite the warmer weather, I love knitting at the moment. My pattern of choice is a light and airy cardigan, Hitofude, which is designed along Japanese principles. It’s a deceptively simple (well, so far) knit and the pattern is satisfying. But is it just the pattern that’s sparked my interest?

I don’t think so. I think it is a symptom of the fact that, at the moment, I am quite content with my lot in life. I’m finally feeling relaxed and work is not dominating my life for the first time in a while. At a time when mindfulness is de rigeur, knitting is definitely a kind of yoga for the mind (I apologise for the description, but it’s true.) I like to get out the knitting, make a good cup of tea and just sit down in front of Netflix. At the moment I’m knitting to RuPaul’s Drag Race. It’s fabulous. 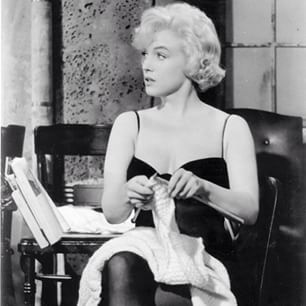 I’m not sure anyone can top Marilyn in the glamorous knitting stakes.

Knitting also means I’m looking ahead. Don’t get me wrong, I’m enjoying the good weather, despite not being a summer girl, but I’m designed for cooler climes and making knitwear means that a time that can be grim, cold and depressing can be a time that’s cozy, warm and pretty. I can pick patterns and yarn and imagine the finished product.

There’s also the element of love. D has asked me to make a jumper for him- and matching ones for his toy monkeys, Larry and Barry. And I’ll do it, because if I make you something- whether it’s knitted, stitched, grown or baked- it’s because I like/love you.

I’m devouring knitting magazine, scouring blogs and Pinterest and revisiting my quite large library of knitting books for inspiration. What’s in your queue at the moment?

Earlier on today, I read this piece by Hadley Freeman in The Guardian about that bloody M&S suede skirt. It made me think and I reached an epiphany: I am never going to be fashionable. And do you know what? Despite the fact that I read fashion websites, follow the Twitter accounts of fashionable ladies and read magazines almost obsessively, I have made my peace with that fact.

I’ve been obsessed with Audrey Hepburn since I was a teenager (and before she was trendy and appearing posthumously in creepy chocolate adverts), but I always knew I’d never look like her. Similarly, I’m reading every book I can about Alexander McQueen before I go to the exhibition in a couple of months, but I know I’ll never wear couture.

It’s nothing to do with being a mum- I was never particularly interested even when I had disposable income/a house free of suspicious smears- but I do know that if I bought The Bloody Skirt, it’d have jam smears and highlighter ink on it within seconds of putting it about my person, and those stains would have absolutely nothing to do with D.

As a kid, I grew up in the shell suited 90s and loved my knock-off version of a Global Hypercolour t-shirt. My hair stuck out, in unruly mockery of my mum’s efforts to try and make me look vaguely neat for school (I remember the other kids laughing at a photo I’d had taken in Year 2 because- gasp- my pony tail was more electro-shock than Elnett smooth. I didn’t really give a monkeys, IIRC.)

I never had the confidence, or (I thought) the figure for fashion when I was a teenager. I dressed baggily, or in HUGE flares that I bought from the Corn Exchange in Leeds before it went all gentrified. I wore a t-shirt with the original line up of Charlie’s Angels on it without really knowing who they were. I had pink hair and I was free of the constraints of fashion, as I thought at the time. 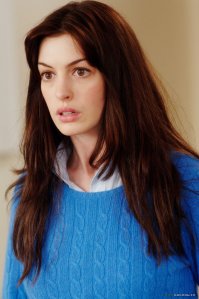 Now I like to keep it simple, although also very much in the confines of my “secondhand dress/less than a fiver, thanks” philosophy of clothes. I knit stuff, I don’t own a Breton top and, despite my repeated attempts, I still can’t sew a seam straight. As much as I’d like to say I’m channelling Stevie Nicks, it’s probably safer to say I’m more bargain basement. And I’m cool with that. I’ve had 31 years to get my head around it, after all.

So what about the M&S skirt that so repulses me? It reminds me of my GCSE maths teacher, a woman who was probably very well meaning, but a total cow- and she LOVED skirts in that shape and cut. She had all the flare of a frustrated nun (we had a much cooler maths teacher, who I never had the luck to be taught by, who the girls found MUCH more exciting- she was all birds’ nest hair, slightly dishevelled glamour and there were rumours of a very French seeming illicit affair with a married Science teacher) and I think she disliked me as much as I disliked maths. So not even the apparently divine touch of The Patron Saint of Fashion, Alexa Chung, could make that skirt appealing to me.

As you are probably aware, I am currently teaching myself to sew. I am also knitting a cardigan. The other day I had a bright idea: what if, by the end of 2015, the bulk of my wardrobe was either handmade or bought secondhand? Could I do it? Or does that way madness lie? 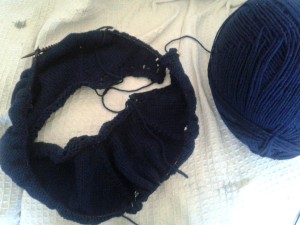 and I plan to use either red or yellow and white polka dot buttons when it’s done: 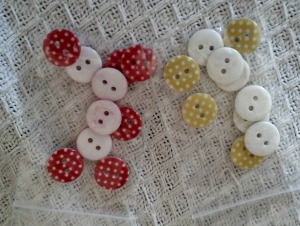 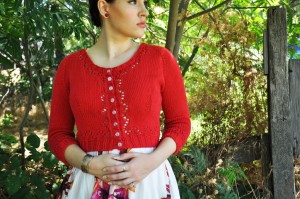 I also have it in mind to make one of the new Colette dress patterns, Moneta. I saw it on some plus-sized sewing blogs lately and fell in love it. It’s the kind of style that I like and that suits me, plus it has so many options. I think I have to make it! 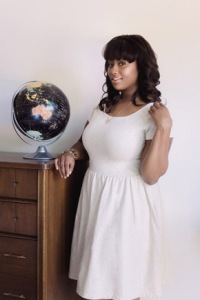 As for my Miette skirt, designed by Tilly and the Buttons, that is going slowly. Not because of the pattern, but because I lost all confidence in myself. Plus a lack of space is getting frustrating. Sigh. I hope to have it finished soon though, so I can show you!

So, my goal: to knit and sew clothes so that by the end of next year I have at least something resembling a wardrobe made by moi. What do you think?