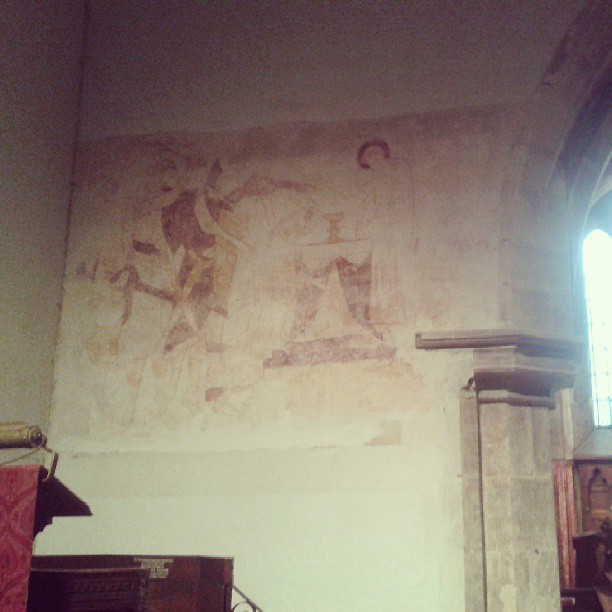 The day after Boxing Day, I needed to get out of the house for a bit. I wasn’t up for a run (I haven’t been for a run since my ill-fated attempt at Hove Park Run last month…), so I decided to go for a long walk around where I live.

I found myself in a tiny graveyard. I was half looking for a particular grave that I knew was there but, like most of December, the day was damp and gloomy- and it wasn’t a good day for a grave hunt (I’ll probably blog about the hows and whys of my search in a future blogpost. It’s a writing related thing.) I also felt a bit odd, wandering around a graveyard on my own, dressed ever so slightly like Justin Bieber. I appeared a bit weird, if I’m honest. And then my eye was drawn to the little church that sits by the graveyard.

I’ve lived near this church, on and off, for most of the time I’ve lived in Brighton, but I’ve never been in. I only found the graveyard about ten months ago, by accident. I noticed that the church was open, so I stepped inside. It was a welcome respite from the weather and I was curious to see what it looked like in the actual church itself.

What I found was a small, pretty church with three thirteenth century murals- the picture above is the best one and it tells the story of the murder of Thomas Becket. It fascinated me and I sat there for a while, just looking at it. I’m not religious, but I found myself sitting in this deserted church (it’s no longer used for worship, but is open most days for visitors), deep in thought. I mean, it’s not every day that you unexpectedly come across a mediaeval religious painting about a mile from your house, is it?

The thought that struck me was that the mural was nearly 800 years old. Somebody at that time painted these pictures on the walls, with no idea that some weird girl, 800 years in the future, would sit there thinking about it all. I thought about all the people who had sat in the church over the centuries, looking at the paintings- whether through devotion, boredom, curiosity or a mixture of all three. Inrealised that the existence of the paintings means that the area where I live has been inhabited for nearly a thousand years and that the church has seen plague outbreaks, survived Henry VIII’s reformation of the church, civil war, a massive fire in 1906 and everything else. It’s slightly mind-bending. I’ve looked at a book that was published just after Shakespeare’s death and the park that contains the church has two ancient elm trees which have stood since the time of Elizabeth I. Both of these thungs impresed me with their longevity. I feel it whenever I go to a museum. Time is everywhere.

I found that I thought a lot about that mural and about time in the days running up to new year. We all get wrapped up in thoughts of ‘new year, new me’ and become focused on stuff like that. But we’re just specks in time, aren’t we? We all think, thanks to stuff like Doctor Who, we’ve become more confident with stuff to do with time and space and history and science, but it’s funny how one thing-in my case, a picture of a martyr- can make you really stop and look hard at your life and your place in the world.