As you may know, if you follow me on Twitter, Benn and I are back in the hell that is house hunting. However, this time we’re looking to buy, so my brain is going mad with ideas for interior design and general nesting. I took a look at Joules’ website to see what I could find…

I love the idea of this bedding set from Joules’ pretty range of duvet covers– I love the combination of teal and chintzy florals, with the stripe design on the reverse. However, as Benn is not a fan of colour in general, I think I could maybe compromise with this simple yet elegant design: 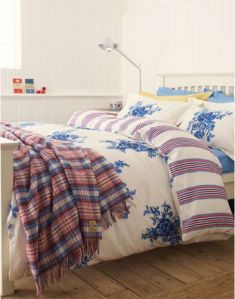 I think it’s rather sweet and reminds me a bit of antique porcelain! The only problem I might  have with an almost white duvet cover is that I might spill tea on it. That would be taking the fine china look a bit TOO far, non? I do rather like that deckchair stripe too. Very fitting for a house in a seaside town, too.

When looking for ideas for D’s rooms, I’d like something that isn’t traditionally ‘masculine’ and this circus cover is perfect- in fact we’ve had something of a circus theme going since he was born and I really like this more grown up take on it: 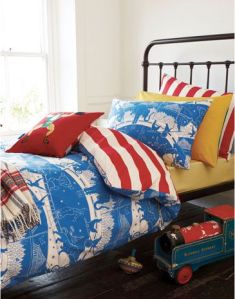 Joules have classed this as a ‘boys’ duvet set, but as a little girl, I would have loved this! It’s a really striking design that would look great in any child’s bedroom and the combination of white, blue and red mean that it’s a really versatile set to have in a kid’s bedding arsenal. Love it.

*Written in conjunction with Joules*